This Mid-Atlantic water plant’s treatment system used gaseous chlorine and dry sodium chlorite to form chlorine dioxide. Chlorine dioxide is fed to the raw water and used to reduce TOC, iron and manganese, TTHM and HHA5 at this facility. Due to the storage and handling hazards associated with dry sodium chlorite (an oxidizer), very few facilities use this product in municipal applications.

The municipal water plant was informed, without prior notice, that no additional shipments of dry chlorite would be available and the foreign producer of the dry sodium chlorite had notified the EPA that it would cancel their registration. The utility had a remaining three-month supply of sodium chlorite and needed to find an alternative treatment option.

The plant hired an engineering firm to evaluate ClO2 equipment options. A new ADOX™ MGII batch generator system was purchased and installed. The unit uses chlorine gas and liquid 25% sodium chlorite supplied in 55-gallon drums. The liquid form of sodium chlorite is handled as a corrosive liquid and is the most commonly used precursor to generate chlorine dioxide in municipal, industrial and food applications. The generator is supplied for manual operation only.
SUBHD (H3):

The plant draws surface water from a river and has a typical plant flow of 2.0 to 3.0 million gallons per day. It typically runs at a set rate to fill the water storage tank in the system. The plant runs two shifts for a total of 14 hours per day. Chlorine dioxide is applied in the raw water.

The previous system was in service for seven years; therefore, the benefits of chlorine dioxide have been apparent to this plant for some time. The plant’s raw water has fairly low TOC so the dose is typically less than 1.0 ppm. The new system was started at 0.5 ppm dose. Their main goal for using ClO2 is to reduce THM’s. They use chloramines in their finished water, which can result in nitrification in the distribution system. When setting up the new generator, the operator requested we set the pH to a level that favored minimum excess chlorine and some unreacted chlorite at the expense of a few percentage points of efficiency. They value the chlorite ion by-product in their distribution system, which is known to mitigate nitrification caused by the use of chloramines. 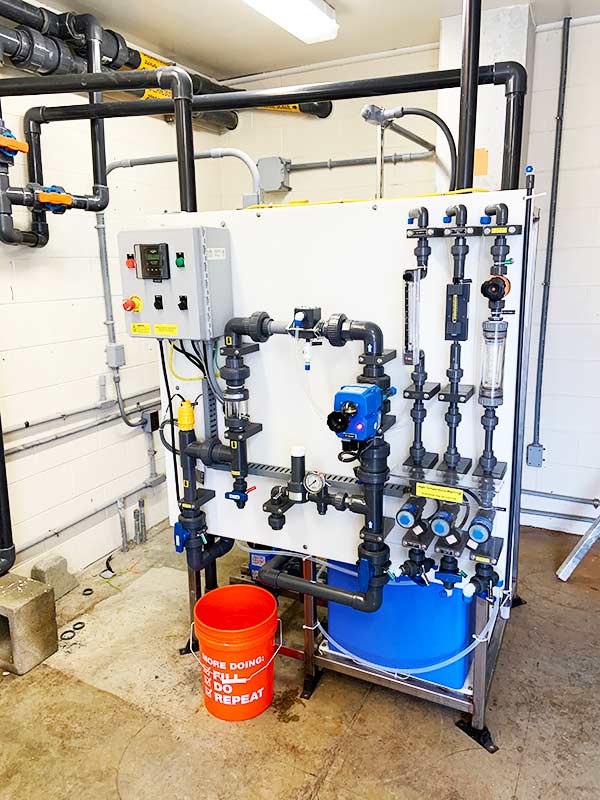 The installation was successfully completed within the 3 month window and the utility remained in compliance. Safety for the operators and the facility was improved by switching to the lower hazard, EPA-approved ERCOPure™ sodium chlorite solution. The plant now has a goal of increasing production to 8 million gallons per day in the coming years.