International Dioxcide, a division of ERCO Worldwide, is a leading provider of chlorine dioxide technology, equipment and expertise to the oilfield.  With over 70 years of chlorine dioxide experience, International Dioxcide (IDI) has been providing materials, equipment and application expertise thru a partnership program with leading field service companies including: Baker Hughes, Fountain Quail, Remote and others.  Together we form the largest network of ClO2 providers in the O&G industry.  Chlorine dioxide (ClO2) is well-suited for upstream oil and gas water applications and is highly effective and more sustainable than other oxidizing or non-oxidizing biocide options (FAQ’s). Chlorine dioxide is a sustainable biocide that exceeds the technical and economic requirements for performance (Demonstration video).  IDI is the industry leader in the safe application of Chlorine Dioxide across all our markets.

Chlorine dioxide is much more selective than other oxidizers. It is very effective at low dosages due to an inherent recycle mechanism and does not form chlorinated organics.

There is a need for improved microbial control of the downhole environment in the oil patch. Current non-oxidizing microbial control programs alone can increase the risk of souring, corrosion, and reduced hydrocarbon flow rates. Non-oxidizing biocides have been the industry standard for years, and yet the downhole microbial concerns have worsened. Downhole conditions strongly impact the performance of non-oxidizing biocides and their disinfection byproducts. Because the source of microbial contamination in the oil field is diverse, the major microbial focus should be to prevent further contamination from surface operations. Therefore, for upstream O&G applications, it is desirable for surface operations and interventions to use a rapid-acting, broad spectrum oxidizing biocide such as chlorine dioxide. Chlorine dioxide at typical dose levels ultimately reacts to form sodium chloride at levels that are insignificant when compared to the natural salt levels found downhole.  Chlorine dioxide is an innovative technology shift for antimicrobial control and other oxidative treatments in the oilfield.   Over the last 10 years numerous case studies have shown the effectiveness and cost performance of ClO2 treatment.   (ClO2 references) 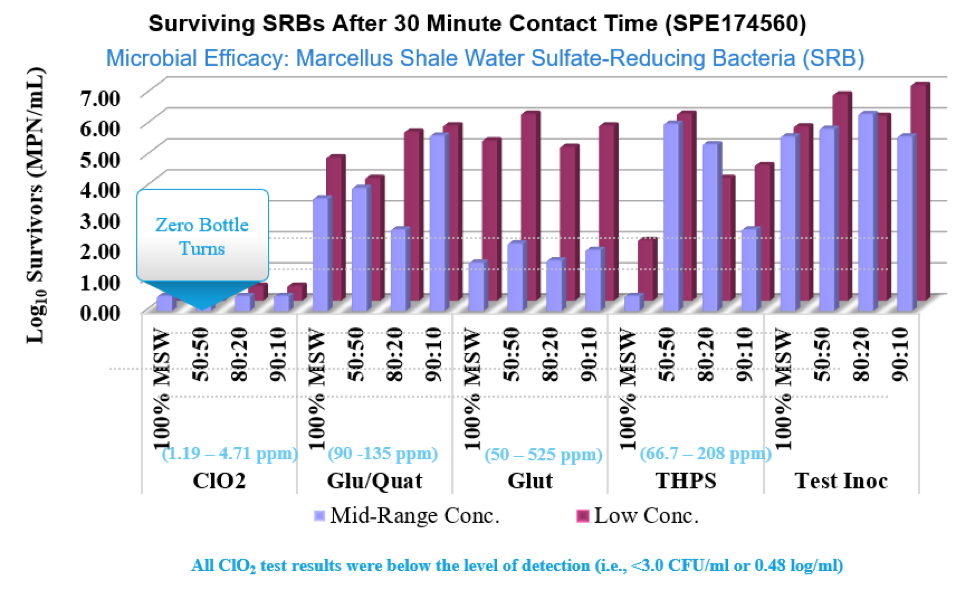 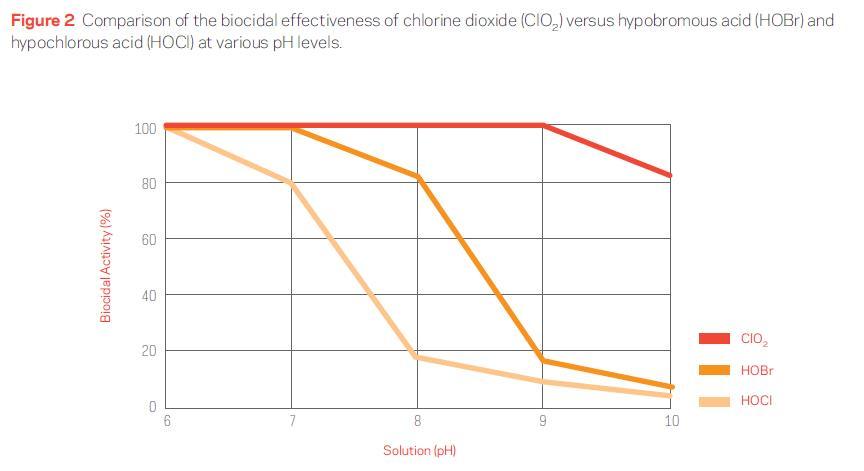 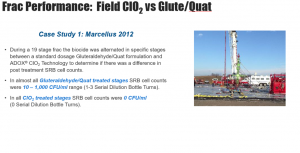 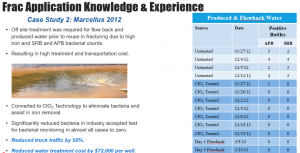 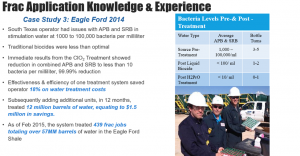 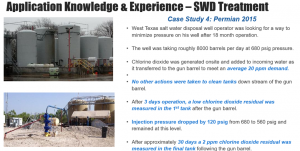 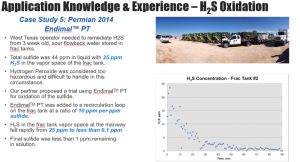 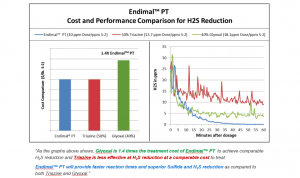 State of the Art Equipment

Close
We appreciate your interest in International Dioxcide.  Take a moment to read our FAQs or request additional information about our products and services.

Microbial Resistance in the Oil Field

Oxidizers that hit multiple targets are very rapid and effective microbial control agents. With chlorine dioxide, the metabolic rate of the microbial species is vastly less important, and the rate of effectiveness is considerably more uniform. Chlorine dioxide is different from traditional oxidizers such as hypochlorite and other oxidizers that are ionized molecules in solution. Chlorine dioxide is a dissolved gas in solution. Therefore, it easily penetrates polysaccharide biofilms and the microbial cell wall via diffusion and performs its oxidative function on the metabolic biochemical components of the microbe.

Inadequate microbial control can have a significant impact on downhole corrosion rates and can create both economic cost and sustainability concerns. SRBs (sulfate-reducing bacteria) are the primary cause of microbial-induced corrosion. Chlorine dioxide quickly and effectively kills SRBs and oxidizes the hydrogen sulfide (H2S) they produce, reducing the sour in the formation water that further reduces the corrosion rates. Chlorine dioxide at typical dose levels ultimately reacts to form sodium chloride at levels that are insignificant when compared to the natural salt levels found downhole. Because its oxidation potential is much lower than chlorine, peroxide, or ozone, and it does not need an extreme pH level to be an effective oxidant, use of chlorine dioxide results in lower corrosivity. It is clear the benefits of using ClO2 as a topside disinfectant in oil and gas applications are significant.

Recently published studies continue to show that ClO2, when properly generated and used at typical 1-5 ppm residual concentrations for disinfection of frac water, has minimal impact on the corrosive erosive nature of fracturing operations. With the increase in produced water recycle for fracturing, frac iron systems are seeing higher salt concentrations and just like sea water systems, they will experience wet dry cycles that allow concentration of salts which significantly increase general corrosion and pitting. Proper use of inhibitors can minimize corrosion from low pH and salts, but not eliminate it. It can be concluded from these studies that acidic solutions are the main contributor to corrosion in frac systems followed by salt from produced water.